Morrowind Monsters: Beasts of the Waters 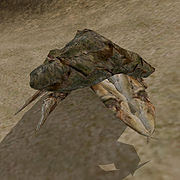 Mudcrabs are hard-shelled creatures, smaller than humans but still big enough to still be dangerous. They are commonly found near water around Morrowind. Mudcrabs usually attack man-sized prey if they feel threatened, but a mudcrab tastes human or demihuman flesh even once it becomes a maneater until death – this behaviour usually gets it killed before too long. 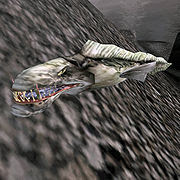 Slaughterfish are carnivorous fish up to two feet in length, with sharp pointed teeth. They form into large schools, deadly to unlucky swimmers. 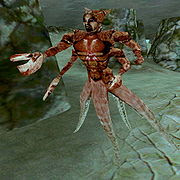 Dreugh are a hybrid of human and octopus in appearance, with a humanoid upper body with pincer hands and a mass of tentacles for a lower body. They are said to have underwater kingdoms ruled by fabled "trident-kings", but are savagely hostile to intruders in their watery domains.

Special Notes: These creatures are easily transported to other settings, to help pad out the slim lists of aquatic monsters.
Posted by Dasharr at 1:18 PM 1 comment:

Morrowind has several types of unique undead. This is mostly because of the cultural practice of "sacred necromancy". This is the raising of ancestor spirits as undead to guard their own tombs from robbers. Those who practice "profane necromancy" (raising any other sort of undead for any other reason) in Morrowind are liable to be lynched or burned at the stake if caught, even though most outsiders see little moral difference between the two types of necromantic arts. 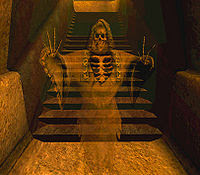 Ancestor Ghost
Ancestor ghosts are semi-transparent, and look like a floating tattered burial shroud, with bones and a skeletal face sticking out.
No. Enc: 1 (1-6)
Alignment: Neutral
Movement: 60' (20')
Armour Class: 7
Hit Dice: 1
Attacks: 1
Damage: 1d4
Save: E1
Morale: 12
Hoard Class: XVIII
XP: 19
Ancestor ghosts are immune to non-magical weapons, except those made of silver.They have all the usual undead immunities too. They can bestow a curse (as per the clerical spell Bless reversed) upon any who invade their tomb. 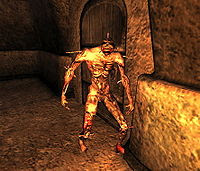 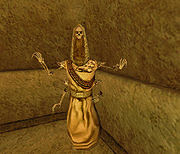 Bonelord
Bonelords are dangerous tomb guardians. Their form is a skeletal body within a hooded burial shroud, with an extra pair of arms attached.
No. Enc: 1 (1-2)
Alignment: Neutral
Movement: 120' (40')
Armour Class: 3
Hit Dice: 8
Attacks: 2
Damage: 3d6
Save: E8
Morale: 12
Hoard Class: XVIII
XP: 1560
Bonelords have all the usual undead immunities. They have all the usual undead immunities too. They can bestow a curse (as per the clerical spell Remove Curse reversed) upon any who invade their tomb. 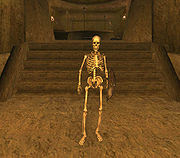 Skeleton
Sacred necromancers often animate common skeletons, either to support the more formidable tomb guardians or instead of them if the more difficult rituals aren't possible. These are exactly the same as the Skeletons from the Labyrinth Lord rulebook (pps.95.96 in the revised edition). 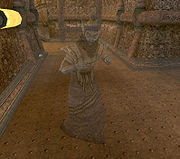 Dwemer Spectre
These are the restless spirits of dead Dwemer, still roaming their lost halls, and adding to the danger already presented by animunculi. Treat them as Spectres from the Labyrinth Lord rulebook (p.96 in the revised edition), except that they can be harmed by silver weapons.

Special Notes: These undead are easily used in other worlds, as long as there exists some individual or group willing to animate the dead to guard their own tombs.
Posted by Dasharr at 11:11 AM 2 comments:

Animunculi are the automata created by an extinct race called the Dwemer. The creations outlived their creators, and still guard the Dwemer ruins scatted across Vvardenfell. The exact nature of the animunculi is – like most things about the Dwemer – mysterious. Their nature seems to a mixture of technology and a lost magical art. Animunculi have articulated joints and seem to be partly steam-powered (steam hisses out irregularly as they move), but boiler machinery alone couldn't remain active after such a long period of neglect.

Animunculi are made of a metal known as Dwemer Brass. Not to be confused with the ordinary alloy called brass, Dwemer Brass (capital "B") is stronger than steel but much heavier, but the secrets of forging it are long lost. Salvaged parts of plating from Steam Centurions and other animunculi can be fashioned by an expert armourer into plate armour, but the result is cumbersome because of its makeshift construction. Such armour has an Armour Class of 1, but weighs 150 pounds (three times as much as regular plate armour). A true master armourer with quality salvage could partially articulate the plating like regular plate armour, so the only problem is the heavier weight of the metal – this changes the encumbrance to 100 pounds (only twice that of conventional plate mail).

The animunculi defend the Dwemer ruins from intruders, showing no mercy and never retreating. Whether they ever showed more complex behaviour is not known to anyone living. They never leave the area that they guard, and are unable to: if they are taken more than about a mile away, they instantly shut down, but reactivate if they come back in range. Whether this is due to a loss of power, loss of behavioural command, or something else is also unknown.

All animunculi are immune to poison and disease. They take half damage from fire and lightning attacks but double damage from cold because of their dependence on steam. They are too noisy to be able to surprise any opponent, with the exception of the Centurion Sphere's initial attack (see below). 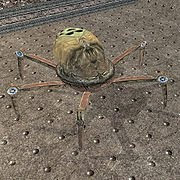 Centurion Spider
These are the smallest and weakest of the animunculi, but are still deadly to the average looter. They have an egg-shaped central body surrounded by six narrow legs that make a distinctive fast clicking sound as they move.
No. Enc: 1 (1-4)
Alignment: Neutral
Movement: 90' (30')
Armour Class: 1
Hit Dice: 3
Attacks: 1
Damage: 1d8
Save: F3
Morale: 12
Hoard Class: XI
XP: 80 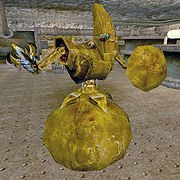 Centurion Spheres are the most unusual in appearance of the animunculi. When inactive, they rest in the shape of a ball, with only a few joins in the shell giving a clue to their true nature. They activate when they detect an intruder nearby, causing a roll for surprise. The shell opens down the middle, with a torso-like body extending upright. One arm has a pincer-like weapon, while the other resembles a shield. The two main halves of the outer shell tilt out to the sides and work like wheels, enabling them to patrol and attack quickly when active.
No. Enc: 1 (1-4)
Alignment: Neutral
Movement: 120' (40')
Armour Class: 0
Hit Dice: 5
Attacks: 1
Damage: 3d6
Save: F5
Morale: 12
Hoard Class: XI
XP: 500 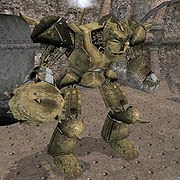 Special Notes: Outside of the Elder Scrolls setting, animunculi could be hard to justify unless a peculiar technomagical lost civilisation like the Dwemer exist in the world's history. This could actually make them a good candidate for one-off special cases, especially in cross-genre adventures in some old-school games. Animunculi might be a better choice for guardians of (for instance) a crashed spaceship than normal robots. The players know, more or less, how robots work and what they are, even if the characters don't, but animunculi are more mysterious because there's no telling where the technology ends and the magic begins. That means that the players are in the dark about their enemies out-of-character, just as much as their characters are.
Posted by Dasharr at 4:41 PM No comments: